When people wax nostalgic, it’s typically for fun stuff, like old cameras and weathered rocking chairs … not polio or segregation. But as you’ve probably noticed with all the folks trying to bring Nazism back like it’s a fun dance move from the ’80s, nostalgia isn’t always harmless. And there are other awful, heartbreaking, and plain stupid things we’re rolling back the clock on. For example …

You’d think dying in childbirth would be like burning witches, or Harvey Weinstein — you know, horrible old threats that modern women thankfully no longer need to worry about. But in the U.S., childbirth mortality rates are rising so fast that our only hope is that the tragic backstories will create a new generation of superheroes. 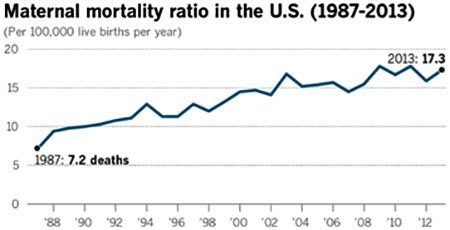 Angelica Quintero/L.A. TimesUp up and away!

Everybody Once Thought Stegosauruses Could Actually Fly

The idea of a wealthy Western country where childbirth is becoming more dangerous may sound ridiculous, but the stats back it up. Women in the U.S. are now twice as likely to die from pregnancy-related reasons as women in Saudi Arabia, and three times as likely as those in the UK. Since 1987, childbirth death rates have gone up by almost 250 percent. It took us longer to bring Star Wars back than the threat of maternal mortality. The U.S. is only one of eight countries in the entire world where this figure is on the rise, an exclusive club that includes the likes of Afghanistan and South Sudan.

While there are contributing factors, like women having children later in life and the ongoing obesity crisis, it’s the American healthcare system that’s truly to blame. Southern states suffer the worst, thanks to issues with insurance coverage and access to care, not to mention the scourge of unnecessary C-sections. Failing health coverage in poorer areas has gotten so bad that Native and African American mothers are dying at triple the average rate.

But sometimes it doesn’t matter who you are, because hospital staff in America are simply doing a piss-poor job of keeping women alive. A lack of education, shaky protocols, and a general inability to recognize problems might seem unthinkable in the nation that launched an electric car filled with potentially deadly microbes into space, but it’s the current reality, and many hospitals won’t change procedures until they have an untenable amount of dead moms on their hands.

People Are Replacing Belief In Religion With Belief In The Paranormal

The U.S., along with many other industrialized nations, are turning into “post-religious” societies. The “religiously unaffiliated” now constitute the second-largest religious demographic. That doesn’t mean those people are getting any smarter; only that they’ve now chosen paranormal belief as their co-pilot. The “religiously unaffiliated” are twice as likely to believe in ghosts as their churchgoing counterparts.

Researchers have also found a relationship between low religiosity and an increased belief in UFOs. The same goes for crop circles. So while you may hear about how the world is becoming more secular by the day, never mistake that for “smarter.” It’s really just parallel stupidity.

At least the huckster televangelists don’t openly explain how the scam works.

Vaccination Rates Are Falling Because People Don’t Trust The Government

Americans’ trust in every single institution has dropped, from the federal government to NGOs. In 1964, 77 percent of Americans trusted the federal government. Now it’s only 24 percent. In 1966, 73 percent of the population trusted medical professionals. Now it’s only 33 percent, with only 23 percent trusting the medical system as a whole. You read that right, 7 out of 10 people don’t trust doctors, a profession that has a catchphrase that literally says, “Trust me, I’m a doctor.” In a recent U.S. poll, only about 40 percent of young people said they believed that vaccines should be mandatory, which might explain why vaccination rates are dropping all over the place. But hey, sucks to be those non-vaccinated idiots, right? More post-vaccine congratulatory lollipops for the rest of us. 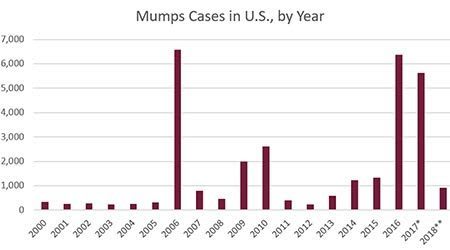 CDCAnd best of all, no dangerous, easily preventable diseases! R-right?

Unfortunately, if enough people choose not to get vaccinated, even those who do will get screwed, thanks to weakened herd immunity. And several places in the U.S. have now dropped below the herd immunity threshold. Leading the pack of anti-vaxxing idiots is Seattle, where only 81 percent of people are vaccinated. That sounds high, but in vaccine terms, figures that low aren’t enough to keep infectious diseases at bay. In 2014, hundreds of people contracted measles at Disneyland. Measles. In 2014. What’s next, whooping cough and scarlet fever? Uh … the answer is “maybe.”

A Lot Of Milennials Think Astrology Is Legit

No longer relegated to the shameful lower left margin of the last page of the newspaper, astrology has been gaining traction over the last few years. According to a study published by the National Science Foundation, “58 per cent of 18-24-year-old Americans believe astrology is scientific.” So while fewer and fewer young people are claiming affiliation with organized religion, many have been compensating by filling the spirituality gap with star magic.

We’d criticize this if it weren’t pretty tame by celebrity standards.

There are now apps and sites aplenty for the tech-savvy chump, while your more vintage goober can appreciate “metaphysical boutiques” offering mystical, taxidermy-heavy bric-a-brac. Like Harrods department store, which actually keeps a perfume-peddling “dynamic astrologer” on staff. For every sequined ’80s televangelist out there, there are now ten internet charlatans advocating the efficacy of celestial prognostication. Even heavily Catholic countries like Puerto Rico and Mexico are feeling the change. Doritos shills to the youth there by employing famous astrologer and wizard cosplayer Walter Mercado for their commercials.

It’s Getting Harder To Vote If You’re A Minority

In 2013, the Supreme Court overturned key parts of the Civil Rights Act because a majority of the justices believed that “the country had progressed and we did not need those provisions anymore.” Apparently some intern mislaid all of their glasses back in 1993 and they haven’t read a newspaper since. Most disastrous was the overturning of preclearance, the law that prevents individual states from changing their voting rules without federal permission. As soon as Uncle Sam stopped looking, Southern Republican states (read: all of them) started ramping up barriers to voting.

Many states introduced voter ID laws, cut early voting, and overall made it much harder for non-English-speaking working-class folks to participate in democracy. In Arizona, the county with the largest Latin population saw 63 percent of its polling places shuttered, leaving only 18 stations for 130,000 people. Across the nation, nearly 1,000 voting stations have been closed since 2013, and almost all of them happen to be in neighborhoods that don’t have a lot of lacrosse fans.

We’re sure the prohibitively long lines were pure coincidence.

Of course, it’s not only Hispanics being kept from the polls. The moment the Civil Rights Act got stripped, Republican lawmakers started asking the election board some very racially obsessed questions, like “is there any way to get a breakdown of the 2008 voter turnout, by race (white and black) and type of vote (early and Election Day)?” and “Is there no category for ‘Hispanic’ voter?” Most telling of all was the request for “a breakdown, by race, of those registered voters in your database that do not have a driver’s license number.”

Want to guess which ethnicity votes the earliest and has the lowest number of driver licenses? Here’s the answer: After receiving the info, Republican lawmakers passed a law that cut a week out of early voting, forbade out-of-precinct voting, and only allowed people with a valid photo ID to vote.

CNNExcept not the photo IDs young or poor voters use, because that would be too reminiscent of democracy.

Fortunately, the law was so blatantly racist that the Supreme Court of North Carolina shut it down in 2016, because it clearly “target[ed] African Americans with almost surgical precision.” But even as you’re reading this, lawmakers are finding sneaky ways to exclude minorities from voting. As Ruth Bader-Ginsburg put it, the government has thrown away an umbrella during a rainstorm because they weren’t getting wet. But Republicans don’t mind. They like closing things that are predominantly black.

If all this makes you want to up and move to Canada, well, all we can do is point you to some new luggage.

Support Cracked’s journalism with a visit to our Contribution Page. Please and thank you.

For more ways we’re all stuck in the past, check out 5 Popular Beliefs That Are Holding Humanity Back and 6 Modern Countries With Shockingly Backwards Views.

Previous: The ‘Notifica’ app wants to prepare undocumented immigrants for encounters with ICE
Next: The 30 Best Ways to Travel for Cheap This Summer