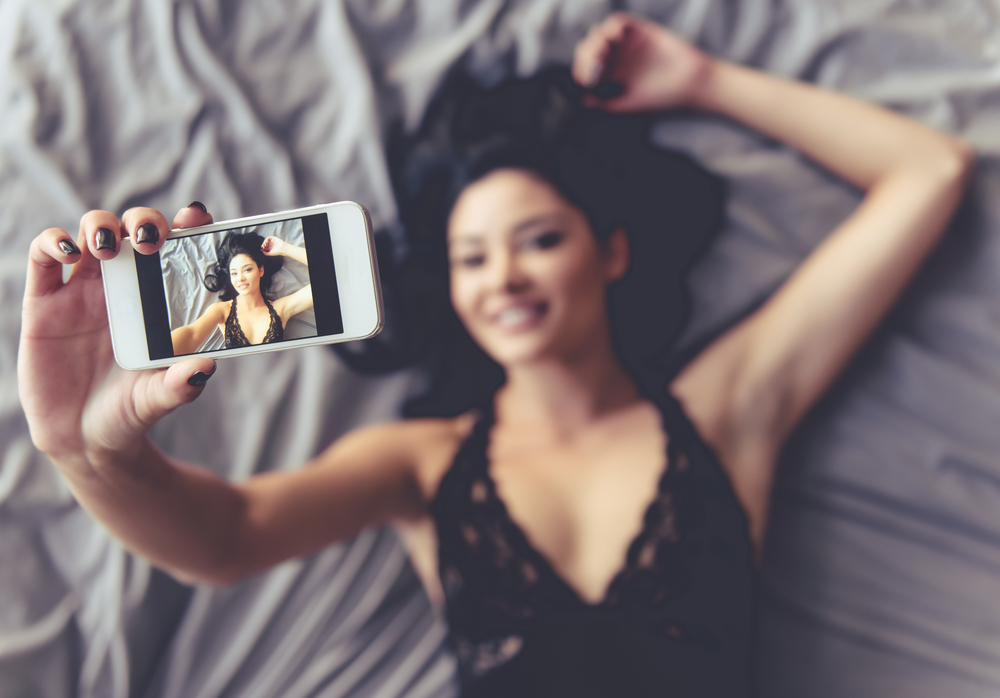 Fuck cuffing season; fall is all about hoeing season. Seriously. It’s scientifically proven that fall is the best season for acting like a hoe, so you can miss me with all your staged pumpkin patch couples photos. And because fall is hoeing season, we need to talk about a very important aspect of hoeing that everyone likes to pretend they’re too good for but nobody is: nudes. Specifically, sending them. Now, before you go all “if you send nudes, you deserve to have them exposed” on me, don’t. I’m a firm believer that anyone who says this has never been asked to send nudes before. Why? It’s… kinda fun. And, IMO, good for your self-esteem (why should anyone look at your naked body if you don’t even enjoy looking at it, right?). But I get that we’re not all Emily Ratajawhateverherlastname is, and we’re not all rocking a flat stomach and perfectly symmetrical boobs. So here’s your guide to taking a good nude that will get you a guaranteed minimum of three heart eye emojis in reply—I’m not saying these are tried and tested tips, but I’m also not NOT saying that.

Okay, first off, I don’t want to be responsible for a millennial iteration of The Fappening, so choose your apps wisely. Personally, I like Snapchat because it gives me the false sense of security that my photos are completely disappearing forever after the allotted time frame, even though I fully know how the internet works, MOM. Anyway, apps like Signal are double encrypted (or so I am told by the guy I’m not NOT sending nudes to who works in some vaguely related computer field), so those are a safer bet. (Again, I am told. I have not tested this out, obviously.) Don’t upload that shit to the cloud, and put a password on your phone if you’re prone to losing it. Or honestly, if you lose your phone all the time, consider Polaroids. If you’re gonna hoe, hoe safely. I believe Marilyn Monroe said that.

There’s a reason most of my nudes are taken when I first wake up in the morning, and it’s because I’m prone to having sex dreams about Future, but also because the natural lighting is the best. It’s the same rule as for any other photo. I would highly recommend keeping your blinds closed, though, because your neighbors probably don’t want to see that shit. Or maybe they do. IDK, that’s all the more reason to keep your blinds closed, if you ask me. But anyway, don’t bother with anything other than natural lighting. Don’t like, go into the bathroom at work and try to do some sketchy shit. It will come out grainy and shadowy and nobody wants that.

Not to sound like Lil’ Jon over here, but this one’s for all the ladies whose boobs aren’t perfectly perky and symmetrical—so like, all of us I’m assuming. Here’s a trick I’ve picked up during my illustrious career of hoeing: In order to give the illusion that you have the type of boobs someone would want to go to a plastic surgeon to purchase, bend over slightly. Gravity is your friend (probably the one time that can ever be said in regards to breasts). And then take the photo from below, like you’re working the reverse Myspace angles or something. I know it seems counterintuitive, but it will make your boobs seem bigger and not half a foot apart from each other. Not that I’m speaking from a personal place or anything… *Shakes fist angrily at my entire female ancestral line for cursing me with this chest*

4. Use A Selfie Stick

OKAY, LOOK. Sometimes you might not be dealing with a boob guy, if you catch my drift. (Vulvas. I’m talking about vulvas.) Show me a woman who can manage to take a decent picture of her vulva with just one arm and I’ll show you someone with superhuman powers of contortion. It is just not possible. That is why, for pictures of down below, don’t sleep on your trusted selfie stick. It just works. To take photos with, I mean. Nothing weird. Nobody has to know.

For the love of God, do not put your fucking face in a nude! I don’t care if he’s your husband. I don’t care if you’re like, really pretty. Plausible deniability is the key to life, or more specifically, to not getting it ruined. I don’t know about you all, but if some fuckboy ever tries to come for me, I’m going to deny this shit to the grave. I’m going to deny so hard I’ll become the queen of it and I’ll earn the nickname Cleopatra. No you’re right, a dad joke was a totally inappropriate choice here. I would like to apologize to my dad, forever, in perpetuity, for this joke and this article. May he never read it. Amen. Also, on a serious note, you’re already worrying about how your body looks in a picture like this. Nobody has time to make sure they’ve got a full face of makeup on to send some racy pictures. See? Safe(ish) AND practical!

Ugh, this is so embarrassing I’m cringing as I write this, but whatever. We all make sacrifices for our art. Your arms and hands can be more useful than you think, and I don’t just mean that you need one to hold out your camera and push the shutter button on it. Like, for instance, if you have the aforementioned I-could-fit-my-fist-comfortably-in-the-space-between-my-boobs issue, you can use your upper arms to subtly push them together a little bit and give yourself the illusion of cleavage and also the ability to actually fit both boobs into one frame. *Sigh* The crosses I have to bear. Like, imagine you’re putting your arms at your sides, only in this case your sides happen to be the outer edge of your tatas. Feel me? If you’re going for the #4 approach, consider delicately placing a hand in the frame somewhere near the action. Guys are stupid, and if you appear like you’re into yourself—which I sincerely hope you are—then they’ll be more into it.

7. Don’t Be Afraid To Filter

I’ve said it once, and I’ll say it again. Let he who has never used the pretty filter on their genitals cast the first stone. Yes, I really did say that once. Why are there not shrines built to my genius? Anyway, fuck it. Filters exist for a reason. Don’t like, give your pussy a flower crown, but a little enhanced lighting and contrast or whatever never hurt anyone.

Previous: The Silicon Valley execs who don’t eat for days: ‘It’s not dieting, it’s biohacking’
Next: Microsoft Excel is about to get a lot smarter